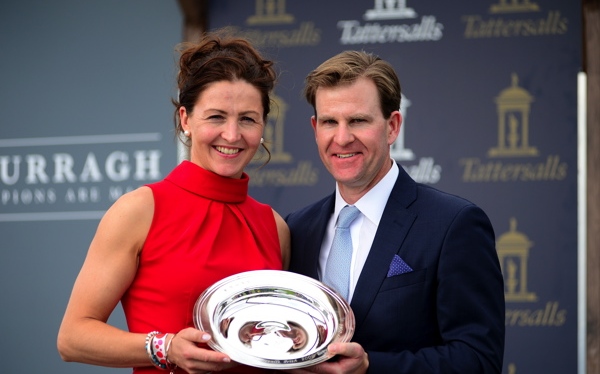 Ken Condon grew up in Ballyhea, Co. Cork. A small parish of 1000 people, he played hurling and football at underage level for club winning North Cork and County honours. He inherited a strong work ethic and a love of all sport from his parents. His father Barry, a native of Inniscarra, just west of Cork city was a GP in the area from 1976 until his retirement in 2017. Ken got his particular passion for horses from his mother Mags a daughter of a local cattle dealer and landowner who also had a few horses in training. Ken along with his three brothers hunted with the Duhallow Foxhounds from a young age, following a family connection that still exists today. Ken went on to represent Ireland at eventing and studied accountancy for two years before following his true passion; that of training racehorses.

Experience was gained across the industry. His formative years included stints with Mount Coote, Coolmore, Haras de Fresnay – Le- Buffard, Lanes End and Neil Howard in Kentucky, before a return to a memorable 5 years with John Oxx on the Curragh. Currabeg housed such luminaries as Sinndar, Namid, Enzeli, Ebadiyla, Winona, Edabiya at this time.

John was a great mentor and teacher to a young person who had ambition and a strong work ethic and together with the top-class staff present it was a great environment for the budding trainer to be immersed in.

Ken would go on to take out his license out in 2002. From here he has developed a respected reputation and whether it’s a solid handicapper, a high-class juvenile or a classic contender, Ken has shown that he and his excellent team can deliver in all divisions of racing. He is also a good communicator and he and the experienced team at Osborne Lodge strive to assess the evolving individual merits of each horse and then advise accordingly the best future course of action.

2018 was a milestone year for Ken, training his first classic winner when he sent out Romanised to win the Irish 2,000 Guineas. Romanised went on to win the Prix Jacques Le Marois G1 at Deauville in 2019 and is now standing at Haras de Bouquetot, where his first foals are due to arrive in 2022.

Ken’s other stand out performances include the consistent multiple Stakes performer Success Days who has had his first foals well received in 2021, Landfall and Newsletter amongst others.

And of course, Laws of Indices, the 2020 Railway Stakes G2 winner and 3rd place finisher in the Jean Luc Lagardere G1, who in 2021 returned to France to win in very gallant fashion the Prix Jean Prat G1 at Deauville. He now continues his career in Australia.

Ken and his wife Pauline purchased Osborne Lodge in 2018. Situated on the Northern edge of the Curragh plains, it has been lucky to its previous incumbents with an Irish Classic haul to date of 18, including 3 Irish Derby winners – Flax Park in 1905, Wild Bouquet in 1908 and later Zarathustra in 1954 – not to mention latterly through the highly successful tenure of the Hughes family, Champion Hurdle and Grand National winners. Built in 1897 by James Dunne, Ken and Pauline hope to continue the classic legacy here and write their own chapter in a rich and successful history.